Calvary Baptist Church began as a small group of people who believed in the inerrancy of the Bible and in the sufficiency of the cross of Jesus Christ.  This group began meeting in their homes to pray, study their bibles, and seek the Lords direction.  Sensing a need for a solid Bible teaching church in Byesville – Calvary was launched on June 16th 1946.

Pastor Dennis Rost came to Calvary in 1994 as an associate  pastor.  He directed ministries to youth and children as well as coordinating visitation and evangelism efforts.  He became senior pastor in 1998 and has served in that capacity ever since.  He has demonstrated a strong commitment to expository preaching and teaching, with consistent emphasis on calling for life transformation  through God-honoring response to His Word.   His wife, Jan, is a special education teacher in the local school.  She has been instrumental in starting WOW groups, BRIDES, and the annual “Ladies Day Out”.  She also actively participates in the music ministry at CBC.  They are the parents of two adult daughters (Jessica & Jill) and a son (Derek), who lives at home. 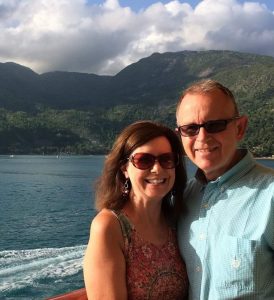 Steve Box leads Sunday worship at Calvary and his wife, Diane, leads our choir program.  Both Steve & Diane have taught music in our local Rolling Hills School District for ove 30 years.  Steve also serves as a trustee and he and Diane lead a Connect Group in their home.  They have raised three children (Joel, Nick, & Emily).

We use cookies on our website to give you the most relevant experience by remembering your preferences and repeat visits. By clicking “Accept All”, you consent to the use of ALL the cookies. However, you may visit "Cookie Settings" to provide a controlled consent.
Cookie SettingsAccept All
Manage consent

This website uses cookies to improve your experience while you navigate through the website. Out of these, the cookies that are categorized as necessary are stored on your browser as they are essential for the working of basic functionalities of the website. We also use third-party cookies that help us analyze and understand how you use this website. These cookies will be stored in your browser only with your consent. You also have the option to opt-out of these cookies. But opting out of some of these cookies may affect your browsing experience.
Necessary Always Enabled
Necessary cookies are absolutely essential for the website to function properly. These cookies ensure basic functionalities and security features of the website, anonymously.
Functional
Functional cookies help to perform certain functionalities like sharing the content of the website on social media platforms, collect feedbacks, and other third-party features.
Performance
Performance cookies are used to understand and analyze the key performance indexes of the website which helps in delivering a better user experience for the visitors.
Analytics
Analytical cookies are used to understand how visitors interact with the website. These cookies help provide information on metrics the number of visitors, bounce rate, traffic source, etc.
Advertisement
Advertisement cookies are used to provide visitors with relevant ads and marketing campaigns. These cookies track visitors across websites and collect information to provide customized ads.
Others
Other uncategorized cookies are those that are being analyzed and have not been classified into a category as yet.
SAVE & ACCEPT